Following the gorgeous lam phloen tape from last week, let's listen to something very different performed by miss Chabaprai Namwai.
Traditionally in Esan (and Laos) storytelling was performed under the name lam phuen in a minimalist form usually consisting of 2 vocalists «mo lam» (a man and a women) with 1 or 2 mo khaen (or sometimes saw fiddle). Those performances would take place in villages or during temple fairs and the stories (folk or buddhist tales) would captivate the audience all night long.
In the mid 20th century this genre began to evolve into "folk opera", a more moderm form of show incorporating theatrical elements mostly inspired by Liké from central Thailand: A stage with some decorative elements and luxurious costumes giving the impression of a court. Some modern molam (like the lam phloen tape from last week) was added in between with some young singers. Later, a full band and some dancers to get the attention of a younger audience (in the mood of luk thung concerts). This evolution of traditional storytelling shows took the name of lam rueang to klon or lam mu and is now the dominant form of lam... A personal favourite!
Just as last week, the tape we have today features Chabaprai Namwai, this time with Sawaynoi Nokkaokhan (and some uncredited mo lam). Together they perform lam rueang to klon: KOULOU NANGHOUA. This story is kind of an Esan version of Romeo and Juliet, it's accompanied by saw and khaen in a traditional minimalist way. It's deep and peacefull... enjoy! 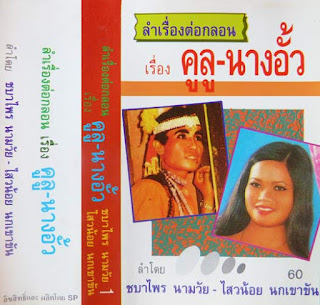