"All the Lao people, even those abroad, remain Lao:
If they eat sticky rice and pladek
and play khaen, then they are Lao"
Let's get out of Esan for a month and explore the parallel evolution of the laotian tape scene. The people living in Laos and Esan share the same cultural roots, (almost) the same language (thought Esan language use the Thai alphabet), the same delicicious cooking style and the same traditions. Not so long ago, the people living in Esan (and in northern Thailand) were often called "lao" by the people from central Thailand.

If in Esan lam is generaly called "molam" in Laos it's simply called "lam" or "lam Lao". The next 4 posts will focus on the latest tapes produced in laos in the early 2000's, all from the main Lao record company: PK Promotion.

If molam had it's own evolution in Esan with the emergence of new modern genres like we heard recently, on the Lao side it's usually traditional styles that are performed in a modern way and nowadays the main influence actually come from Esan. Those differences in the evolution of the same music played by the same people on both sides of the Mekong can be easilly explained by the social, economical and politial differences betwin Laos and Thailand. Factors like colonisation and communism obviously played a major role in the "preservartion" of the Lao style while in Esan both the commercial evolution and the ability to modernise the shows and the sound with the incorporation of foreign influences helped the scene to widely develop and produced some of the biggest bands in the history of popular music.

The Laotian production is somehow stereotyped and you can usually find lam in 2 main "formats" of records: Various singers performing one kind of lam or one singer (or a duo) performing various genres. The tape we have today KHAP LAM THONG THINE TE NUA THEUNG TAI feature LATSAMI PHOUDINDONG performing different kinds of traditional laotian lam: lam tangwai, lam saravane, lam khonsavane "sing", lam Phu Tai... (plus 1 khap). All performed in a revamped style with an interesting choice of instruments creating a distinctive Laotian sound. Each song starts with an audacious intrumental part that introduce the skillful voice of miss Latsami who shows us her  ability to sing in all genres.
This tape (just like the others we'll ear later) clearly show the intersting point of view and the creativity of the people producing  music for PK promotion. Sadly, none of them is credited on tape covers and it's not always easy to find informations about the singers on internet though it's pretty obvious that Latsami Phoudindong is a superstar 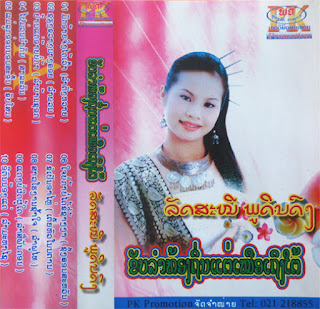