For the last post about the work of Doi Inthanon we have some amazing late 70's lam phloen. If we already heard the work of mister Inthanon from the early 80's with some lam phaen where he incorporates occidental instruments in a fast trendy way, his 70's molam songs were already exellent...

Today we are in the province of Kalasin with one of the molam superstars of the 70's, miss CHABAPRAI NAMWAI. If there was someone determinated to succeed as a molam singer in Kalasin at this time it was surely the young Chabaprai. In 1972, 18 years old Chabaprai join the Rung Esan Lam Phloen troupe and get her first hit with a sad song called "sao na sahun".  7  years later she toured all around Esan and recorded several records (usually on Tra Phin Khaen for the vinyl edition) and at only 25 years old Chababrai already saved enough money to start her own molam troupe: the Kwan Jai Kalsin. Later, in 1997, Chabaprai became a traditional molam teacher in her home province (while recording a few lam phutai cd's). Chabaprai passed away in 2009 living behind her some beautiful songs that have been re edited on CDs by Krung Thai.

The tape we'll ear today: LAM PHLOEN KLON KAE KLON, has been recorded in the second part of the 70's, 9 lam phloen and 1 lam long written by Doi inthanon. The voice of miss Chabaprai is superb and shows the wide spectrum of her talent. It's bold, deep, often pretty fast and the whole production behind her is brilliant: A large band featuring all kind of traditional Esan instruments (phin, khaen, saw, percussion...). Some great backing vocals and hand clapping. It's gorgeous and also perfect for full nights of dancing parties during temple festivities...
I'll post a pretty different tape from Chabaprai Namwai later this week if some of you are interested. 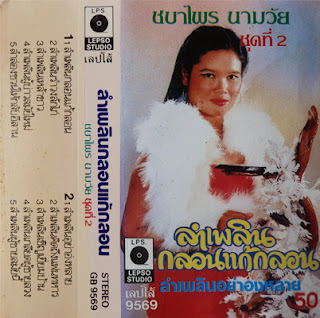 I love it! Thanks.
Froggie