Today I planned to post an early 2000's molam sing concert tape but the tape broke at the same time as the tape player...
Anyway, let's end up this serie of posts with some recent live recordings.
Nowadays, molam sing is the one of the leading form of modern molam (the most popular singers often perform in Bangkok and in some provinces outside of Esan and even sometimes in Laos). The bands play "regular concerts" as well as shows during temple fairs or cultural and religious festivities. The bands are also often hired for private shows on various occasions such as weddings or companies staff parties. A group of musicians, some dancers, some supporting singers (usually younger or lesser known) and a pair of main singers singing solo or on duo and inter acting together and with the audience (there is usually also a comedian messing around from time to time with his khaen).

Today, the live music selected is from all kinds of bands (if the performances can be very different, the music remains the same with some style variations). As described in the previous post the set up can be minimalist (mostly for bands touring locally). The biggest stars of the lam sing scene usually perform with a dozen of musicians (on the back of the stage): 1 drummer and 1 or 2 percussionists, 1 or 2 keyboards, a brass section (trumpet, sax, trombone) 2 guitarists (often tuned as phin) a bass and sometimes a khaen. On the front of the stage, up to 20 dancers: usually young women shortly dressed.

Molam sing concerts did not only change the sound of molam into something fast, modern and often furious but nowadays also incorporate other forms of popular Esan songs (pop, luk thung, rock Esan...) played with lots of energy. Singers promote their new songs on stage but also cover many songs. The frontiers between the genres are quite blur and the main focus is the performance style, the energy of the shows and the fun.

One sure thing is that all the songs performed have one main thing in common, their Esan identity.
As this post is about the actual scene, I did not want to present any official recording actually for sale. I made a little selection of songs that are currently popular as wll as some more "classic" forms of fast molam, mostly recorded live in Esan and compiled by friends (within the last 2 years), in the middle of hot nights of frenetic dancing.
After this little stop in the 21th century to talk about the actual molam scene (as it remain usually unknown out of south east Asia). Soon we'll get back to some dusty old tapes and something very different... 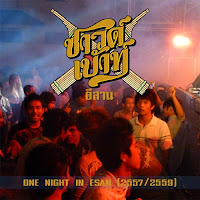