It's the end of the Songkran holidays, in every Esan provinces there have been some molam concerts every nights. Today's tape takes us back in time in the 80's. If now lam ruang (story telling) is all the rage, at the time of the recording of this tape lam phloen still brings people to dance and enjoy traditional and folk tales. Even some "local bands" can play in front of thousands on week-ends or during holidays. This post is the first of a serie of 3 posts on the evolution of modern molam concerts, it will be followed by some early lam sing and some excerpts from recent performances.
We'll spend the night with RAKHANGTHONG. They are one of those rather small sized bands that tours mostly in surrounding provinces. This tape was the only occasion I ever had to ear of them. In this 80's live recording the RAKHANGTHONG band alternate lam phloen "songs" and lam ploen ruang, a form of storytelling. In this case "SRI KHOT PHET THA BONG", the story is about Sri Khot and his diamond cudgel weapon... A well known folk tale among the Lao and Esan people.

The lam ploen ruang  parts comes with keyboards (since the mid 80's the traditional khaen have tend to slowly disappear at modern concerts. On stage it's either often used on pre recorded play back or replaced by keyboards (the khaen is sometimes present on stage as an cultural symbol).
If the lam ploen ruang parts (or other lam forms of storytelling) still play a major role in modern molam concerts they are also the occasion for the musicians, singers and dancers to get a few minutes of rest before it gets wild again with the dancing parts. Usually in the middle of the night an alternation of 3 or 4 fast songs and about 10 mn of lam ruang, (or funny comedians). Note that during week-ends and holidays the bands play usually around 8 to 10 hours depending on the circumstances.
The lam phloen 'songs" here are not surprising (you heard some here already in previous posts), some good lam by some great singers and a small basic set up to back them: guitar, bass, drums. The surprise comes from the keyboard player who can get really wild from time to time. In my opinion that's what makes this tape really great (some kind of cold 80's synth pop feeling sometimes).
As often with those live recordings it's a bit rough and there is no post production involved or anything fancy added (no mic stand to add some audience reactions as most occidental live recordings would use). As usual there is no information about the year or the place of the concert.
I preferred to keep it in it's original state and I did not remove the little gaps that happens a few times. 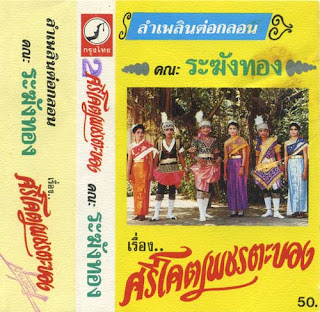 Live recordings are very popular among molam fans, probably due to the original nature of the oral transmission of molam but also for the energy of those concerts (It's a lot harder to find live recordings of luk thung Esan on tapes, I don't have many). Nowadays, a major part of the diffusion of molam is done through live audio or video CDs and also distributed for free online. Live recording by some of the hard core fans is widely supported by the bands as a way to promote the quality of their live performances. While traveling with friends to go concerts in Esan we only listen to live recordings.