We continue our review of the evolution modern molam concerts with an amazing recording!
If I have quite a few lam sing live tapes, today I choosed to present the audio part from a VCD as this recording is really interesting. Those who will goThailand will sure rush to try to find a place to buy it and it's not going to be easy as I found it in a shop selling discounted CDs from old stocks (most hypermarkets in Bangkok sell similar VCDs at discounted price and you can find them in small shops located in big markets). Most parts of this show has been released as part of a 5 VCDs set (in total  I payed 100b... 3$ for the whole set of about 5h of show. what a steal!). I was quite lucky to be able to collect the whole set from 2 different shops.

We'll spend the night dancing with "MAN SUTKHIT" (extreme fun) as this VDC set is called (a perfect definition of lam sing!). It's a live caption of a molam sing contest, probably from th late 80's or early 90's. Quite a few lam sing recordings of small bands have been done during such contests and it's quite usual to find tapes with a picture of a lam sing duo and their trophies.
The concert takes place in a temple deep in Esan in the province of Udon Thani. For this show, a few thousand people, some officials and the jury sitting at tables a few meters right in front of the stage, some cars parked in the middle of the audience and a small stage. The set up is as minimalist as possible: 4 dancers at a time and 2 different groups of musicians during this part of the night: drums, bass, khaen and electric phin. The microphone comes from the top of the stage, just like at boxing shows (like often at this time for lam klon performances)... Get ready for the fight!

Minimalist but WOW! Everything is more than great here and the phin players are experts at playing their wild instruments, the first one is literally possessed by his stratocaster shaped phin while the other one is applied at playing his double necked instrument. 3 different singers (not the winners) during this part of the concert performs some early lam sing: fast songs, impro and speeches. It's raw, intense and hypnotic, the inter actions between the singers are often quite explicit. You can easily understand while listening to this recording why some of the older performers of more traditional forms of molam where not very supportive of this new trend as at this time it's been a real generational clash.

Molam sing came out around the mid 80's (though the beginning year, the place of origins and the names of the first practitioners are still contested). It's a period of modernization in Esan and traditional forms of molam in rural areas enter in competition with modern forms of entertainment such as TV shows, pop music, mobile discotheques and free outdoor cinemas during temple fairs. As an answer from some molam bands a  faster tempo is used and some wild sexual content is added in dances and the speeches (though this content existed before at a lower level in lam klon). Lam sing is the contraction of "molam racing" (a reference to fast and wild motor cycle competitions and a sign of trendiness). 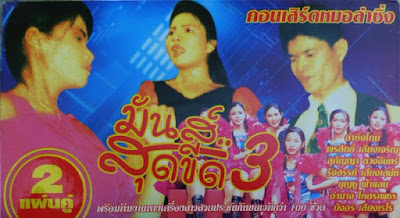 NOTES:
The cover features 2 different shows on 2 VCDs
(this one is the top part)
If I find a website selling this VCD set, I will post a link

If the emergence of lam sing was widely debated by the molam traditionalists it obviously played a major role in the transmission of the molam culture among the younger generations (especially those living in big cities). Nowadays, Lam sing is one of the dominant genres in Esan, even if all kinds of modern music from all around the world are available (and get very little audience). Many bands of different capacities performs every nights in big cities and small villages and it's not unusual to see a a few hundreds of young Esan people living in Bangkok traveling all the way for wild afternoon concerts in Esan villages during holidays. Of course there has been some evolution in over 30 years of lam sing performances, the next post ending this small introduction of the modern Esan concerts will be the occasion to take a closer look at the actual scene.