I'm just back home after a pretty nice concert...
If I planned to share another gorgeous tape from miss YENJIT PORNTAWI, I guess it won't happen before a few weeks as I could not resist to share one of her live performances after the great show I just attended.

We are now in the middle of a buddhist holiday and quite a few temples in Bangok and in Esan have some free concerts and temple fairs and tonight miss Yenjit was singing a few blocks away from my house. The concert happened in a small temple and as usual in that case the audience is mostly local as people come to pray and make a donation to the temple as well as eating some snacks and letting the kids have fun. Tonight, some talented young luk thung singers started the show while some local young girls and teenagers were dancing on stage.

Then Yenjit performed a mix of luk thung and molam (some lam sing and lam ploen) songs with a really fresh voice and a nice smile for about 1 hour, sadly she was backed by some pre-recorded music but she was really happy to be there and it was really fun to watch her perform mostly some of her well known songs including one of her biggest hits: khidthung thung luy lay and her new song Sangfah pai haa phi, her personal take on the Mai Waenthip song I talked about in the last two post. Luckily the rain was kind enough to wait for the end of the show to come...
ขอบพระคุณคุณเย็นจิตรเป็นอย่างยิ่ง

Well, let's talk a little about the live recording we'll enjoy today. It comes from a VCD (only the sound of course). I was lucky to find this little gem from old stocks in a small record store in Esan (Yenjit was very surprised when she saw it and asked where I found such thing... If she saw my huge collection of her music she would have had an heart attack!).

Though the cover doesn't come with any information it's obviously a concert from the mid 90's. Some fast lam sing and a few older songs (both luk thung and molam) backed by a full band (a dozen of musicians). A really nice straightforward recording with no post production as you can usually expect from such Esan recordings...
We'll sure enjoy more and more music from Yenjit Porntawi in the next few months as I really want to cover all the styles she brilliantly performed during her ongoing career but for now, I go to bed and let you enjoy! 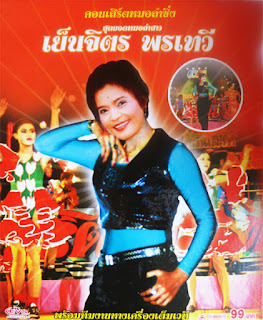 (By the way, I came back home with a really good self produced DVD recorded a few months ago, I'll post it sooner or later when she will not sell it anymore)

What a blast! Thank you.