This week, let's get deep into Esan, in the south eastern province of Ubon Ratcthani, located on both the Lao and Cambodian borders. If Ubon is well known for it's prehistoric cave paintings and the "candle festival" that will happen later this month during the buddhist celebrations of khao phansa, today we'll focus on another local celebrity, mister Tonsai Taptanon.

Mostly famous for being one of the very first musicians to play electric phin (during his years with the Phet Phin Thong band), Tonsai Taptanon is concidered as one of the most influent phin player of his generation (with of course his friend Num Phutai who is behind the production of this tape). Those 2 musicians are a great source of inspiration for many young Esan musicians.
Nowadays, Tonsai Taptanon have his own "drummers band" and still performs live quite often (his band will surely play this year again for khao pansa so don't miss them if you are around).
Today we'll listen to DONTRI PHUN MUANG ESAN vol2. This record is not related to the tape previously posted here, (it means local music from Esan). Today's tape features some early 2000's electric phin mixed with electronic and traditional elements, a style that became a standard in contemporary instrumental phin recordings (many similar records can easilly be found in records shops, supermarkets and also online classified as "phin sing" or "phin prayuk") It's the kind of music you can ear during Buddhist processions and parades for family events in the streets of Esan.
Volume 2,  2 sides of  20mn phin sing non stop medley from the 2 stringed phin  master... 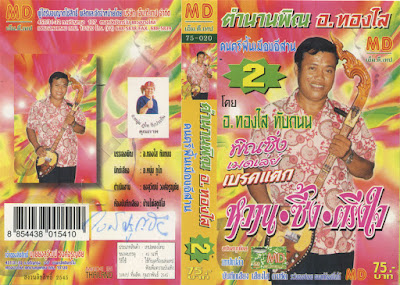