If yesterday we heard one of the weirdest tape from my collection, there's something that often seem stranger than that tape in Thailand, Thai people call it "farang". Let's have a fun look at them (us... me!) through "international molam"...

"Hello phubao farang..."
LAM FARANG
If some westerners happen to play traditional Esan instruments such as phin or khaen, not many "farang" ended up playing on a molam record!

The first one (released in Laos) feature a western khaen player, the second one is even more surprising as mister Ron Hemmer sings lam phloen and had an LP released in the 80's! (with Suprani Srisuphat sharing the tracklist). Sure not an easy thing for a non Esan and non professional singer, well it's not that bad even though it sounds pretty weird... You can listen to some of those songs on the ASEAM website.

SCAM
It's actually hard to believe but apart from eating insects and visiting temples, one of the things tourists especially want to do when they visit Thailand is to get scammed. They can then tell their friends about their exiting adventures... I actually never been scammed and I guess it takes some real efforts to be scammed properly but this tourist did a pretty good job (well don't expect anything honest from that rat trap called "zudrangma")... Let's read some excerpts from his story.

In his post, he also talk about this LP record  "A rare 1980s Thai molam record by Yupin Saaijai priced at $59.00" It's soooo rare that I payed my mint copy 100฿! And by the way, the price of brand new legit molam CDs is usually around 100/120฿... That Maft Sai scammer really have no limits...

Ok, this photo is not from Thailand, even if this pirate CD was not worth buying, it was sure worth a picture.

PING PONG SHOW
If this sign I found in Bangkok is kind of ironic, the next story is quite funny too...

Some western "musicians" branded some Thai culture under the name "the sound of siam"... Ironically some Thai musicians are playing some westernized jazzy thai music under the same name... (their version of Sao Esan ro rak is here). What a great long distance copyright ping pong game!

COPY
Talking about copy and westerners playing Esan instruments, that "siamese temple ball" record wrapped in mystery is quite messy but also kind of entertaining. Though nobody in Esan would believe 1 second that it could be thai it's quite well played marketing. 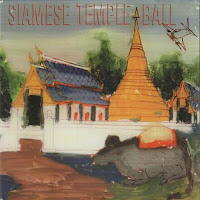 MONKEY SEE MONKEY DO...
This "farang" seems to have fun but his version of traditional Esan dance is not very academic...


that "genius" from "studio lame"