This week was very important for the buddhists community of Thailand with the celebrations of Asalha Puja and Khao Phansa. If the festivities are observed all around the country with prayers, merit making and of course party and concerts, one of biggest celebration happen in Ubon Ratchathani with a street parade featuring some traditional Esan dances and music as well as some wonderful sculptures made of carved wax that are traditional during Khao Phansa. (other Esan provinces such as Surin or Khorat also have some really great celebrations and gorgeous wax carving but what happen in Ubon, is really incredible).

As  this week we are Ubon, it's a good occasion to listen to one of my favourite local superstar, miss ANGKHANANG KHUNCHAI. If we already enjoyed some of her best lam toei recordings on duo with P.Chalatnoi Songsoem and also live with Phet Phin Thong, today we'll listen to her gorgeous voice on some classy luk thung with ESAN BAAN HAO (Esan our home). If Angkhanang had her first success in the 70's, performing both early modernised molam and luk thung she later focuced on performing all kinds of molam: lam phloen, lam long, lam phu tai... on both traditional and modern forms solo or on duo, most of the time with P.Chalatnoi Songsoem and Rungfah kulachai (and nowadays with her daughter) She also re-recorded some of her early luk thung success with some pure Esan instrumentals in the 90's and was involved in some surprising projects sometimes too... I should post some of those somedays. Angkhanang still performs often, I been lucky to see her quite a few times on stage.
The tape we have today feature 10 luk thung songs (plus 2 instrumental versions) performed in a pretty classic late 70's early 80's style with mostly occidental instruments (guitar, bass, drums, keyboards and a brass section). Enjoy! 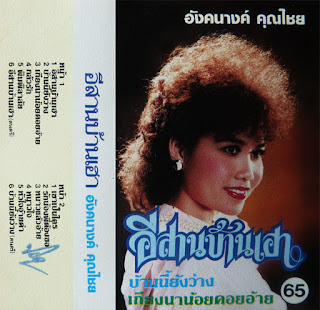 OF COURSE, YOU CAN BUY
SOME ANGKHANANG KHUNCHAI
CDs ONLINE