Last week, it was festival time in the province of Loei, in the northern hills of Esan, many people from all around gathered to the disctrict of Dansai to pray and party for Phi Ta Khon, a traditional event celebrated on both sides of the mekong. In Dansai, ghosts parade in the streets, showing some amazing folk art creativity. A local event that is not to be missed if you plan a visit to Thailand as it's pretty unique (the province itself is truly gorgeous and really worth a visit too).

Being in Loei, let's enjoy some local sound from one of my favorite luk thung Esan tape. Recorded in 1989, SAEO PHU BAO is one of the first two tapes released by MAI WAENTHIP, a singer I particurally like and who had quite a strange career. Two wonderful tapes featuring some of the most inspired musical composition of Num Phutai mixing perfectly with the sad voice of Mai Waenthip (the second song of this tape "I have headache because of my ex" is to die for) and then, already some kind of a best of featuring 9 songs from each of those tapes.

Then a few other recordings on obscure labels such as "siam disc" and another record also featuring some of her early songs but with a new recording that by far was not as great as the original. If Mai Waenthip had some kind of success with "the girl from Loei still wait" it's quite ironic to see that after waiting for more than 25 years this song became a huge success 2 years ago, well sadly for miss Waenthip, it's actually an explosive cover version that got all the fame. Mai Wenthip still sing in a Lam ruang to klon troupe but they never tour as far as Bangkok and I still did not have a chance to see her on stage yet. 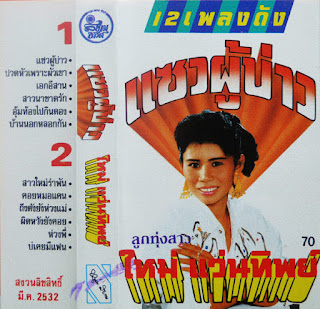 the photos are from last week