Today is a special day, it's the 100th record I share through blogs. I started with kadaotonkao.blogspot.com, trying to get away a few hours per week from my growing addiction to Esan music by sharing records from all around the world... As you can see, it did not work that well. So today I won't share one but 10 records at once, some antic 78' molam recordings  I was religiously keeping for a special occasion.

Today we'll visit the native province of miss Khampun, Ubon Ratchathani, deep in the south east of Esan. We been visiting the province many times recently as it's historically one of most important place for Esan music (just like Khon Khaen/Udon Thani that we'll soon ear about). If the province of Ubon is well known for it's prehistorical sites, we'll stay focused on some very old molam recordings!

YOT MOLAM NAI ADIT "best molam from the past" seems to be a pretty confidential tape compiling some 78' records (originally pressed by Columbia) from the mid 50's. The guy who gave it to me actually had 2 copies of that tape from some old stocks. He told me I would love it and he was more than right). If this band is not much of a mystery among Esan records collectors it's because KHAMPUN FUNGSUK is one of the first of the kind to produce some  recorded molam (while electricity was still not available everywhere in villages).

Khampun, Sunthorn and their band gained a solid reputation with the help of radio diffusion and seems to have been an important source of inspiration for young molam singers of this era who later becames legends. If Khampun Fungsuk started by recording various kind of traditional local forms of lam they then followed the molam evolution but they only switched to lam sing after Sunthorn passed away. As many molam traditionalists, he wasn't really seeing this new form of molam in a positive way (early lam sing was often considered rude, too fast and far from the original lam values). The band later performed under the stage name of Suntarapirom but I'm not sure if they still exist.

The tape we have today feature over 1 hour of some of their early studio recordings. 20 "crispy" traditionally performed molam (lam long, lam toei...). It's brilliantly executed by different singers and off course, only accompanied by a khaen. It's pure, deep, gorgeous. I have a particular crush for the lam toei duo that open the second side.
I spent quite a few hours cleaning each tracks as it sounded like... well, vintage 78' records but I did not spend too much time trying to figure out what was wrong with the hand typed track list (the last song of each side is not on the list and it's possible that some songs have wrong tittles). Some typos has been corrected by my friend Pueng (thanks) but some mistakes can remain... Only music matters anyway and today I'm happy to share those 20 pieces of Esan music history.
It's interesting to note that some shellac is produced in Esan and was often used in the process of dying silk long time before being used for the production of the 78' records we ear today. 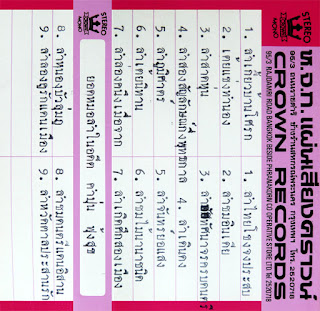 Thanks a lot to the people who took the time to put up this tape!

You can see some 78' thai records sleeves here