Back to Esan! I hope you enjoyed our little ramble in Laos. I could not leave Laos without a tape that sometimes plays with references from both sides of the Mekong... Well all kinds of references in this case...
The tape we'll ear today LAM PHLOEN SORN YING puts together some songs released in the late 70's by an amazing duo. On one side, the versatile and talented singer PHAIRIN PHONPHIBUN (and some uncredited guests) on the vocals and on the other side: the very eclectic song writer, radio Dj, producer and record compagny manager Surin Phaksiri who takes care of the songwriting and the production (like on this tape I previously posted).
Unlike his name could suggest, mister Surin Phaksiri in fact comes from the province of Ubon Ratchathani (like quite a few other musicians and singers featured here already).  If as a radio Dj Surin started by focucing on traditional molam from both Laos and Esan he also had a huge interest for all kinds of music from both occidental and asian genres. His huge interest for music has played a key role in his work and on the evolution of the Esan sound (on both molam and luk thung). Surin was the first to create a fusion between lam phloen and luk thung and he had a great talent to incorporate foreign influences into his arrangements. His talent to play with styles gave him the opportunity to direct the production of many movies soundtracks including the famous Monrak Luk thung and the chance to write some awesome adaptations of Bollywood songs (as Indian movies played in Thailand in the 70's were fully dubbed in Thai).
Also from Ubon, Phairin Phonphibun started singing in her early teenage but it's really in the late 70's when she started to work with Surin Phaksiri that she became a superstar. Surin wrote, produced and distributed her songs through his eponynous label and invited her to join the Thitso Lam Phloen band. 3 Years ago Miss Phonphibun sadly lost her long battle against cancer.
In LAM PHLOEN SORN YING both Surin Phaksiri and Phairin Phonphibun show the large panel of their talents: Lam phloen, luk thung (including songs brilliantly mixing both genres), references to Laotian culture with some adapted khap thoum from the movie soundtrack of Monrak Mae Nam Moon on track 2 and 3 (with Waiphot Phetsuphan as guest star answering Phairin). The arrangements are really interesting and goes from traditional Esan style to various western set up with full classy bands featuring a large horn section in a pure 60's/70's luk thung style or a smaller set up featuring drums, guitars, farfisa organ... 12 really nice songs and a perfect opportunity for Phairin Phonphibun to enchant us while jumping from a genre to another... 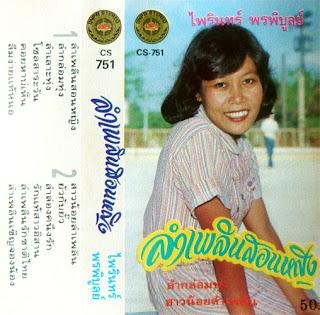 oh, i've been looking for these songs in decent quality for so long! thank you very much monsieur michel, ms. phairin & mr. surin :)

This is lovely, thank you for your excellent posts.