Today, last album from the serie of lam Lao tapes from the great PK promotion. This time with a more "synthetic" take on traditional Laotian lam styles.

Another long play tape this week. It's pretty nice that Laotian tapes are usually over 50mn as when you find a singer you like it's almost impossible to find more than one tape (exept for Phouvieng Vathalisack, the 90's superstar who released quite a few recordings of both lam Lao and pleng Lao, a variant of Thai luk thung). Usually modernised lam Lao don't follow the shorter "pop" format that became an international standard in popular music. I guess it's because the production of 7' vinyl has been pretty small in the country and did not have any impact on the lengh of the songs. The protectionism of state radios and the rather small size of the country probably also helped keeping the songs formats unstandardised (wich is really enjoyable).
The tape we have today KHAP LAM THONG THINE features MANIVANE KHAMMANI singing 8 different kinds of lam Lao and 2 khap (khap thoum and khap ngum) in a modern style were most of the instruments are played on keyboard and drum machine. The result is surprisingly good and original. It's rich, ingeniously produced and it keeps the deep hypnotic feeling that you can often find in more traditional versions, Manivane's voice feets perfectly here...
I guess I should post more Laotian tapes every once in a while as there are not many avaialable online and those are usually exellent. 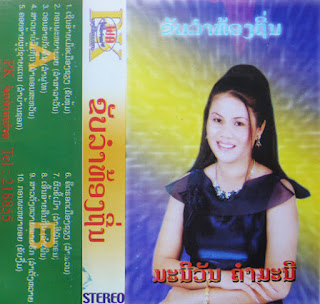 Next week, back to Esan!