To follow the last post about Noppadon Duangporn and his career as a luk thung singer, today we have a tape from Phet Phin Thong. If Phet Phin Thong is well known as a luk thung and molam troupe as well as a record label, it's with their comedy shows "talok" that they really became famous in Thailand (those shows are still very popular nowadays and it's easy to find video CDs re-editions and lots of videos online).
During the years of celebrity of the Phet Phin Thong comedy show on Television, Noppadon Duangporn had the great opportunity to promote the new records of his label by adding live music performances to the shows and the tape we have today feature some nice guests.

If the tape we have today can seem of little interest for those who don't understand a word of what Noppadon and his friends are talking about in their Esan jokes, it's an important part of the Phet Phin Thong History and you still can enjoy the live music played during the show with some phin and khaen and the guests featured in this recording: Num Phuthai (we'll ear more about him and his phin very soon), Angkhanang Khunchai and P.Chalatnoi (already featured here).
I'm very busy this week so I leave you with this tape... 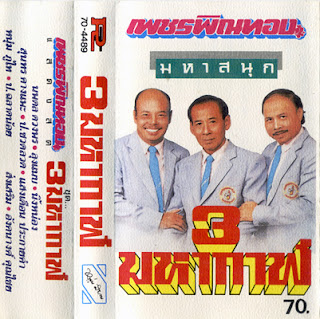