PART 2: THE GENESIS "HOLIDAY IN CAMBODIA" 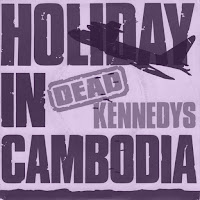 This part won't be over developed as it doesn't relate to Esan music at all (you can find additional document online by yourself if you want). Still it's particularly important to see how the simple minded scamming techniques of some "adventurous cultural heroes" used here have been simply adapted in Thailand to start A CULTURAL SCAM!... History repeating.

During the late 90's an American tourist pretends to have discovered the lost “Khmer rock & roll” while in holidays in Cambodia... The kind of "lost treasure" in fact documented in books like the Garland Handbook of Southeast Asian Music (1995).
Sorry about that...
If it's possible to wonder why western men go to holidays in Cambodia, I can tell from my personal experience that it's obviously not for cultural or musical reasons...
So, the guy discovers some “lost music” and of course feel legitimate to start a cover band and sell some Cd's of it.
Lucky for him that all the copyright owners died in the Khmer rouge genocide! Also lucky that a little studio musician could find such a good business opportunity during his “cultural” holidays. (no copyright owners = nobody to ask for copyright fee... PURE PROFIT!).
NOTE: This story is pretty much the same as the one told by the french colonialists who “discovered”the ruins of Angkor and stole all they could sell back in Europe (not necessary as “art” but also recycled as precious metal).
So, our little Indiana Jones of Khmer music goes back home and tell his friends about the cash they can finally make as a cover band. They get a pretty good Khmer singer in one of the numerous restaurant/karaoke places from the local Khmer community and start their little business under the name of Dengue Fever. They even self produce a little documentary where they show themselves as heroes and cultural saviours being welcomed as kings during a trip to Cambodia!

A gross tourist scam in the middle and on the sides, the same music!
Not lost at all! Funny that most of those Cd's were produced and distributed
mostly in USA, at cheap price, for the local Khmer market!
This business opportunity inspired some of their friends also fascinated by cultural... Cash and another documentary came out about “Cambodia's lost rock & roll”... Oh st Anthony of Padua please help those jerks.
During my time in Southeast Asia I been to Cambodia a few times (the Khmer-Esan music and the cultural influences between the two cultures being of major interest for anyone who would like to understand Esan music and Thai culture).
I spent a lot of time at markets and places selling music where that “lost music” is of course the easiest thing you can find, way easier than the Khmer-Esan “kantruem” I was looking for. Everywhere I been looking for music I always been offered to buy the most famous music of the country, those pre-Khmer Rouge "oldies" shared online by Khmer people as mp3 or on youtube (Pan ron, Sin Sisamuth, Ros Sereysothea...).
The so called “Khmer rock & roll” has been very popular in Cambodia during over 10 years before the genocide, it's a blend of American rock & roll and a hint of french yé-yé performed in Khmer language and similar to other forms of what is often called “nuggets” by westerners and can be found in many countries. If those “nuggets” usually lost popularity with the natural evolution of trends, in Cambodia it became a symbol of the life before the genocide. Not only it's not “lost” but it remains quite popular and can be heard everyday in the streets, in the bus, on the radio. It's a major influence in the kind of “ballroom music” you can see all day long on the karaoke TV channel. Legit and pirated copies are sold everywhere in music shops and markets...

Surprisingly and unlike those Dengue Fever heroes would like you to believe, their covers of Khmer songs remain totally unknown in Cambodia. I never saw any of their music being sold anywhere in the country while it would only take 10mn to copy some of their music from youtube and burn it on a cdr (which is done pretty much everywhere in the country for any music that could potentially sell to locals or tourists).
Following the profit made by Dengue Fever a cover band of that cover band started it's own business under the name “Cambodia space project”. Exactly the same concept and same songs, a Khmer girl has also been hired on vocals and a bunch of musicians who never made any cash on their own music started to make profits on the culture of the victims of the Khmer Rouge genocide (while Cambodia is one of the poorest country in Asia). Those dengue fever guys might have been really pissed off to get a cut of their honestly stolen music going to other pockets!
Pan Ron again on Khmer TV.
This time a cover version of "romvak twist"...
looks like "lost music" not only never got lost
but also is still very popular after over 45 years!

If I haven't met anybody from dengue fever, I had the privilege to meet one of those filthy bastards from the Cambodia space project at the shop that guy was running in Phnom Penh. If I been there in the morning it was obvious that the activity in that street at night was pretty different (coincidence?)... I spent 3mn in that rat trap where there was only 10 records and Cd's for sale and some badly printed ugly silkscreen posters mostly made out of jpgs stolen from internet that the owner of the shop offered me to buy for 3 weeks of the basic local salary (80 to 100$ each) while those crap would not have been worth worth 5$ in Europe or USA (I know that subject very well).
After those 3 long minutes, I left and gave all the cash I had in my pockets to a modest lady selling tapes and cd's at the nearby market...
As far as I can see, those people who seems to be seriously involved in “non cultural profit organizations” sadly never found the time to promote Khmer culture in any way, never gave a chance to any local musicians to tour outside of Cambodia or to distribute their music, never supported any Khmer independent record companies based in USA... They only took advantage and made profit on the culture of some people they have no kind of respect for... Neo-colonialism at it's best!

2$ scarves from Phnom Penh markets + 0.5$ cheap embroidery = 14.99$
If they have no respect for the Khmer people... They don't have much more for you.
MONEY IS EVERYTHING / EVERYTHING IS MONEY!
Less “locally involved” but just as filthy and pretty important in the genesis of the “molam scam” you can find a large bunch of compilations made by some R.A.T.S* who made a business of taking advantage of the musical heritage of many places considered “poor countries”. Thailand been the most popular place for tourist compilations: “sound of Siam”, "Thai beat a gogo", “Siamese soul”, "molam Thai country groove from Isan", "Thai dai?", "Thai funk" (seriously?) and other randomly compiled music (without any cultural or pedagogical point). Molam, luk thung and other popular songs available for almost nothing in local Thai shops and internet!
When I say almost nothing, I mean it, according to mister gossip** who is close to those R.A.T.S, they usually payed no more than 100$ for the copyright of  all the music used in a compilation.
Some of those nice people sometimes just “forgot” to pay anything! (Mister gossip mentioned 2 Indonesian compilation, it should be easy to check if necessary).

None of my Thai friends deeply involved in local music scenes
have any kind of clue about such compilation business.

I never heard of anybody from businesses like “soundways”, “sublime frequencies”, "finders keepers" (perfect name for such business!) or related R.A.T.S giving back any of their easy cash to charity (while they mostly target "poor countries") or having any kind disinterested support for any local musicians or cultures: NEVER...

*R.A.T.S: As there was no existing way to describe such experts, I think the acronym for Researchers on Asian Traditional Sounds fits pretty well.

**I won't name "mister gossip" as he was clever enough to never give me any written information on his little friends...

The knowledge of those R.A.T.S seems really minimal and don't often get any deeper than what you could find in the "lonely planet". Check those amateur videos sold by sublime frequencies, they are usually made at places anyone can find in tourist books... Those places where your grandma got you some "hand crafted" gifts made in Chinese factories.
Still those R.A.T.S did a pretty good job to get a very good profit selling a bit of exoticism to curious people with a minimal investment similar to what you would spend to record 1mn of music in a professional studio in Occident. Add 1h of work on a shitty cover (using stolen pictures) to pack it all and let's go to the bank!).
If  obviously it's not the exoticism but the easy profit that inspired people like “maft sai” (zudrangma, the paradise Bangkok molam international band, studio lam, toomturn molam group...). You can replace the word “Cambodia” by the words “Thailand” or “Esan” and you pretty much get story told by maft sai and the inspiration behind his business plan! Stay tuned for more details in the next posts.

IMPORTANT NOTE:
-All the photos signed "Saobao Esan" are all taken by myself. Those only show regular events in their most usual forms. Nothing unique or exceptional, nothing tricky. What you see here happen very often.
-All the tapes and other formats cover pictures signed "Saobao Esan" are from my personal collection.
-Everything you read here is part of my personal researches and not some copy/pasted unverified information. If you want to quote anything from my work, you should contact me first.
-The documents I quote are not information and can't be seen as "work", those are fraudulent propaganda I compare to facts. Such propaganda not only discredit Esan culture but it also fools YOU. The people paying those frauds are either victims or "partners in crime", Their reaction (or absence of reaction) following my publications will show their positions.
All the people mentionned in this serie of documents are welcome to express their point of view here (I can add more document showing they are clueless liars upon request).